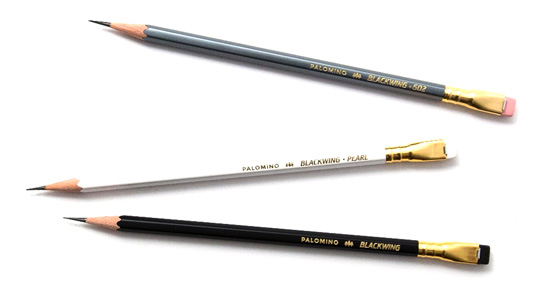 From its introduction in the 1930s to its disappearance in the 1990s, the Blackwing 602 sported a pink eraser. Now the classic look is back. Blackwing 602 pencils will now come loaded with the traditional pink eraser. If you prefer the black eraser, we’ll still be offering black replacement erasers on our website.

The black imprint didn’t seem to speak to essence of the Blackwing Pearl or align with the gold imprint on other pencils, so Blackwing took the pencil back to the drawing board. Blackwing Pearl pencils now feature a gold imprint and white eraser. If you prefer the black eraser, we still offer black replacement erasers on our website.

The Blackwing received the subtlest of updates. Blackwing pencils will now come loaded with a black eraser, giving them a simple and sleek black on black look. If you prefer the white eraser, we’ll still be offering white replacement erasers on our website.